The Girl Who Listened Differently (part 1)

This story is about exploring new possibilities and discovering unexpected beauty. It is for anyone who finds themselves moving out from the familiar places of their life and it is also for those who have begun dreaming of home from their far travels.

It was originally written to explain myself. And it still does. My travels have now taken me to far distant places of the mind and heart. However I am presenting the story here in the hopes that it can also say something to you as well.

May you find in it images for your own travels to and from home… wherever that is for you.

Once upon a time there was a little girl who lived in a forest. It was a very lovely forest with oak trees and pine trees, maple trees, spruce trees, apple trees and pear trees. There were many other kinds of trees as well. But a botanist would be the only one interested in naming them all. 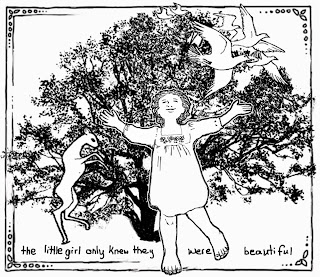 The little girl only knew they were very beautiful, tall and green. There were also all sorts of bushes and flowers. Moss covered the ground under the trees. It rained every afternoon at four o’clock. Sometimes a thunderstorm would start during the night and last all through the next day. The forest was always moist and green.

Squirrels lived there and chipmunks. There were deer and otters and foxes. There were frogs and raccoons and a bear. He lived in a cave on the hill and bumbled through the forest once a month to find honey. He only wanted honey once a month. The rest of the time he ate berries on the hill.

Birds of all colors flew through the forest. They were like flashes of red or white darting among the trees. Owls hooted and crickets and bullfrogs sang all night. Bumble bees buzzed in the little clearings all day. Crows called down from over the tops of the trees where they flew. And every so often all the sparrows would gather in one tree and raise such a noise you could hear them all over the forest.

That was the forest where the little girl lived. But you really would have to go there to understand.

One day the little girl met a turtle. He was sitting on a rock in the sun dozing and warming himself.

“Good morning,” said the little girl. She was well mannered. The sleepy turtle opened his eyes and said “Oh, yes.” Which didn’t make a great deal of sense. Then again it didn’t make no sense and sometimes turtles are that way when they first wake up. So she simply ignored it and asked, “Where are you from?”

“From the desert” he said slowly. 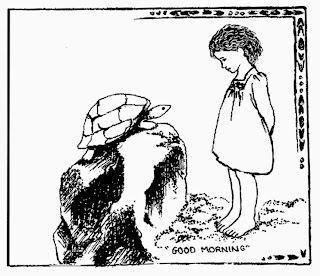 “And where is the desert?” she asked. There was a pause as the turtle had to open his eyes again. You must understand that this was a very wide-awake little girl and a very sleepy turtle.

“At the edge of the forest,” he gave a great sigh.

“Yes. .. Yes. .. Certainly.” He said each word with a pause after it as if he couldn’t remember what it was he had been saying. You can’t get much out of a turtle when you just wake him,

“What is it like?” But he had gone quite to sleep and she didn’t hear another word out of him. That was all right though, because she had already decided to go and see it herself.

To be continued
Posted by Mardi at 6:38 AM