The Girl Who Listened Differently (part 2)

“I am going to see the desert.’’ she told the tallest cedar. “Can you see it from there? Where is it?”

“Yes it is over there,” he tossed his branches to the west. “But you do not want to go there, my Dear. It is all dead and brown. There is only sand and rocks and the hot sun beating down. You would be very unhappy and would doubtless die there. Stay here. Do not go to the desert." 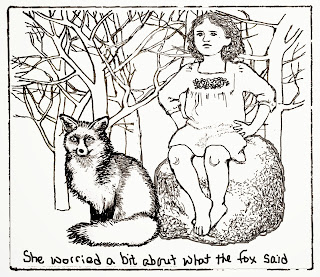 But she was a happy child and laughed, “Oh, dear Cedar, it can’t be as bad as that. Perhaps it will be a little hot, but I would not die.” So she ran off to ask the oldest fox.

“Is the desert really only sand and rocks and the hot sun beating, down?” she asked.

“Yes, ” he said becoming very concerned. “You can lose yourself before you even know it. There is no water, no rain, no brooks. You would die of thirst. I have been there, little girl, I know.”

She worried a bit about what the fox said but soon cast it aside and set out for the desert in the west. Laughing, she marched willy-nilly out into it and looked around. There surely were rocks and sand and a very hot sun. But the sand felt warm between her toes. It was a lovely day.

Very soon, however, her head began to hurt from the brightness of the sun all around. The sand began to burn her feet and there truly was no water at all. She turned back to go home to her forest but it was nowhere in sight.

“Oh, I am lost,” she cried. She was very afraid now that perhaps the fox and the cedar had been right. But she was determined not to die in this miserable desert. So she sat down and thought. She did not want to move for fear she would lose herself more. So she just sat and thought. 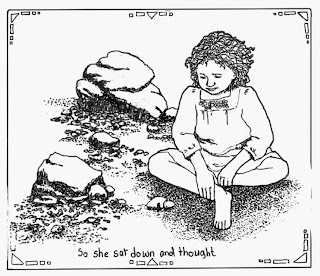 And she thought of the most simple answer. Where she had to go was where she had come from. She had come step by step and if she followed her own steps backwards she would certainly arrive at where she wanted to be. She was so happy she jumped up and carefully followed her footprints till she was back in her own forest.

Now you may think the little girl never went out in the desert again. But you are very wrong. In fact that same day she sat at the edge of the forest and looked out at the desert all day. She sat and watched it all the next day and the next as well. Her eyes began to grow accustomed to the glaring sun. The brown was not just brown, she saw, but red and orange and yellow and many, many colors. It was actually a very beautiful desert.

The cedar was sleeping and the fox was somewhere else and the little girl had a very good idea about what she wanted to do.

To be continued
Posted by Mardi at 2:37 PM